Recently, we posted an article discussing where mortgage interest rates may be heading over the next twelve months. We quoted projections from Fannie Mae, Freddie Mac, the Mortgage Bankers Association and the National Association of Realtors. Each predicted that rates would begin to rise slowly and steadily throughout 2016.

However, shaky economic news and a volatile stock market have actually caused rates to drop six out of the last seven weeks, and have remained at 3.65% for the past two weeks. 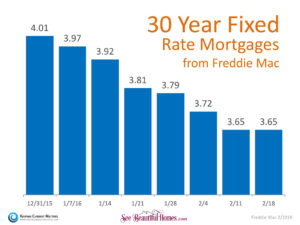 Rates have again fallen to historic lows yet many experts still expect them to increase in 2016. The only thing we know for sure is that, according to Freddie Mac, current rates are the best they have been since last April.

If you are thinking of buying your first home or moving up to your ultimate dream home, now is a great time to get a sensational rate on your mortgage!

January 2017 Update: While we have recently seen mortgage rates move up and experts predict rates will continue to move up in 2017, historically, mortgage rates are still low. When compared to past decades, it’s still a great time to get a low interest mortgage.