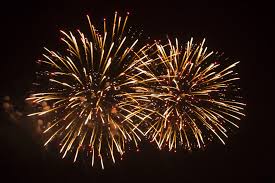 The holidays are over and the new year has begun! If you are a home buyer or seller that took a break in December, it’s time to hit the market with renewed focus. Homebuyer traffic is already starting to increase. So sellers, go ahead and start preparing your home to sell. And buyers, it’s time to get pre-approval in place so you can be ready when the right home becomes available.

I’ve got the latest numbers for December 2017, so let’s dig in and see how the Central Ohio real estate market ended the year.

The number of homes listed for sale in Central Ohio also dropped in December 2017. There were only 1369 newly listed units in 12/17.

Finally, the number of homes placed under contract in December 2017 was 1942 units. 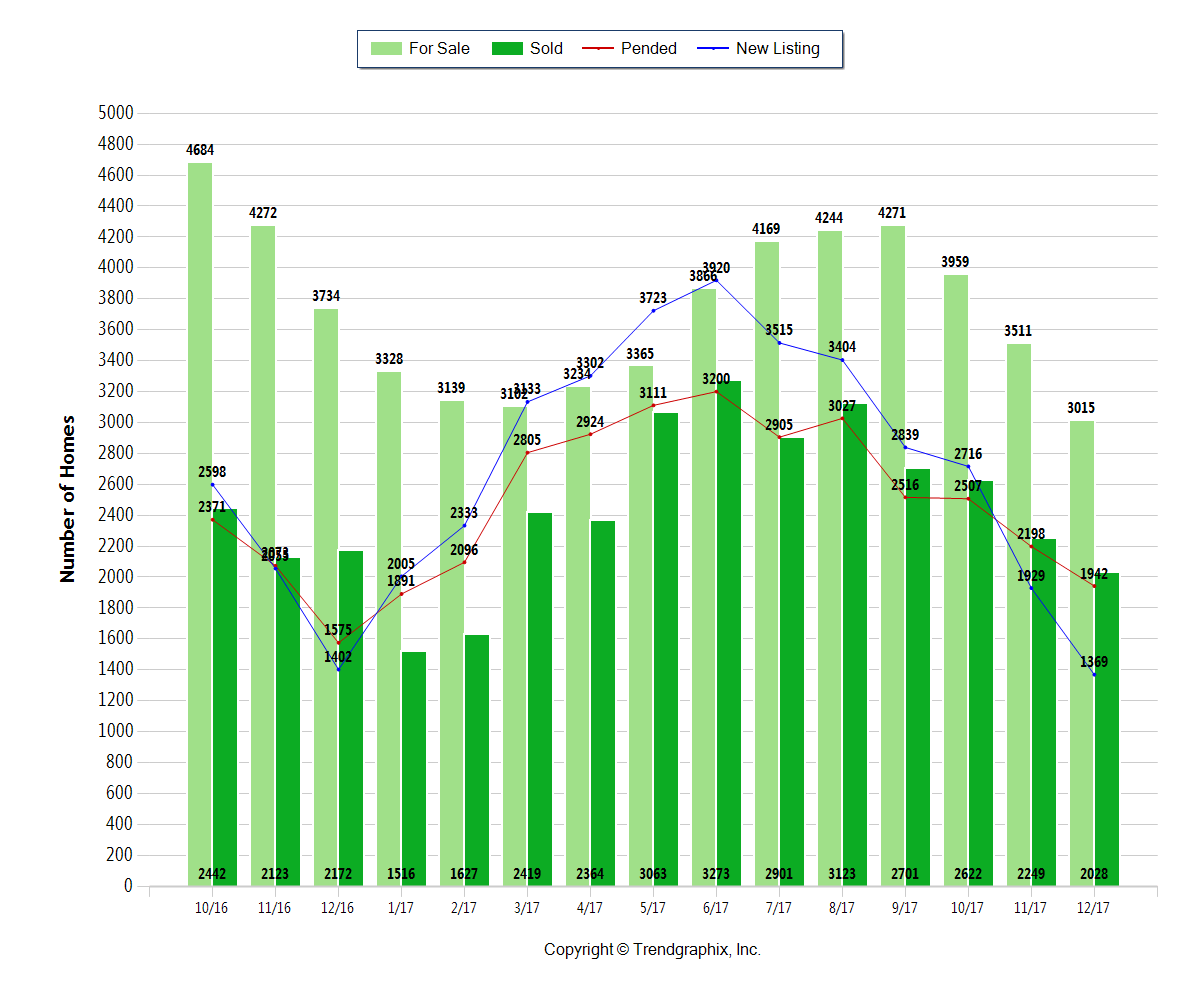 Whether you’re buying or selling you may be asking, “What’s the average price per square foot in Columbus Ohio?” In December 2017 the Average Sold Price Per Square Foot in the Columbus area was Neutral* at $116. That’s….

*Based on 6 month trend – Appreciating/Depreciating/Neutral 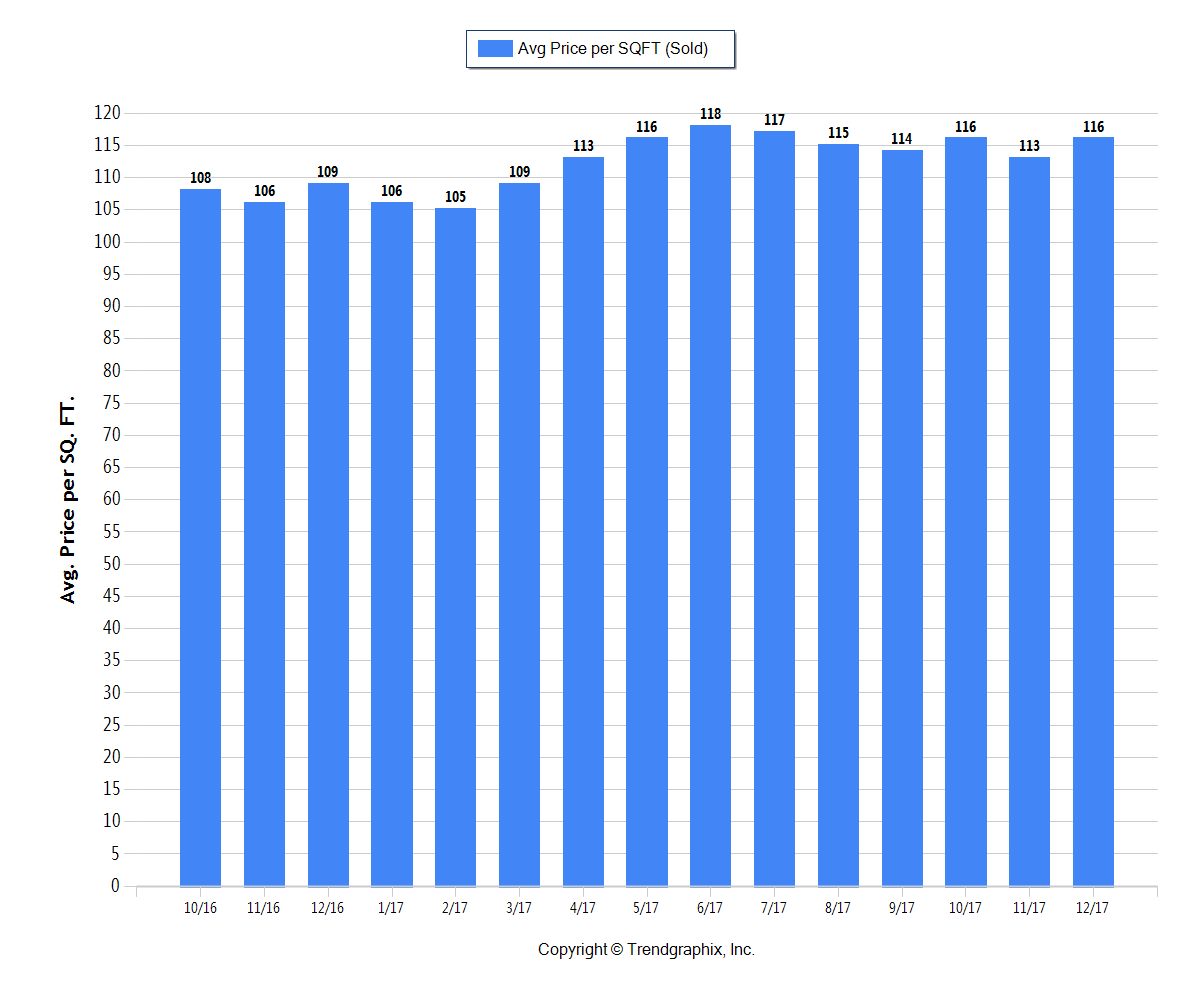 If you’re thinking about selling a house, you probably want to know, “How long does it take to sell a home in Columbus, Ohio?” On average it is taking about 35 days for homes to sell right now in Central Ohio. While that number is trending up* seasonally, that is still a relatively short amount of time historically.

The Sold/Original List Price Ratio fell* in December 2017 to 96%. While the 6 month trend is falling, this metric is virtually unchanged when compared to November 2017 and December 2016.

*Based on 6 month trend – Rising/Falling/Remains Steady 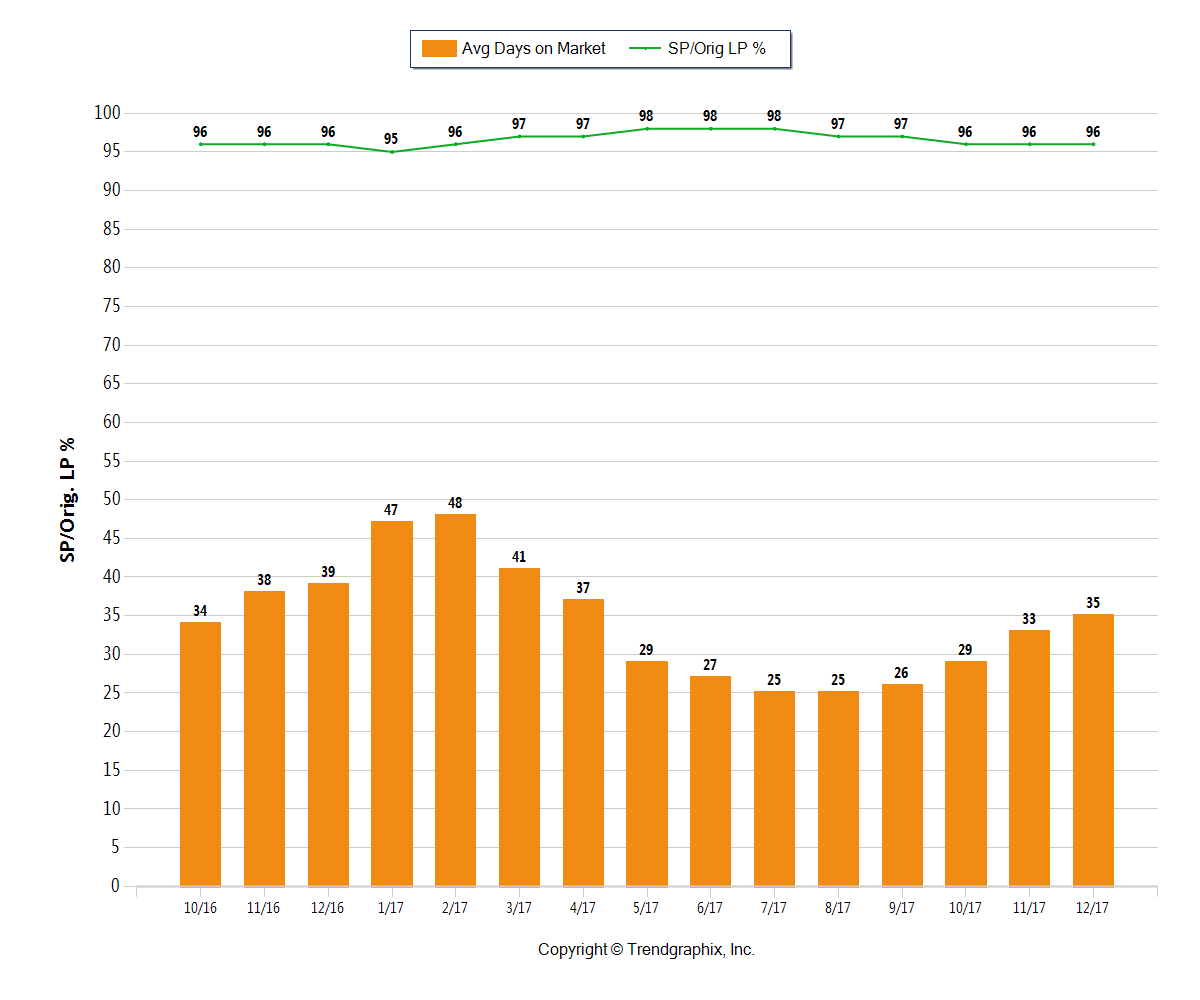 How much are homes selling for in the Columbus area? The short term home price trend is neutral, but we will probably begin to see home prices rise as we move into spring.

The Average For Sale Price also remained neutral* at $350k.

*Based on 6 month trend – Appreciating/Depreciating/Neutral 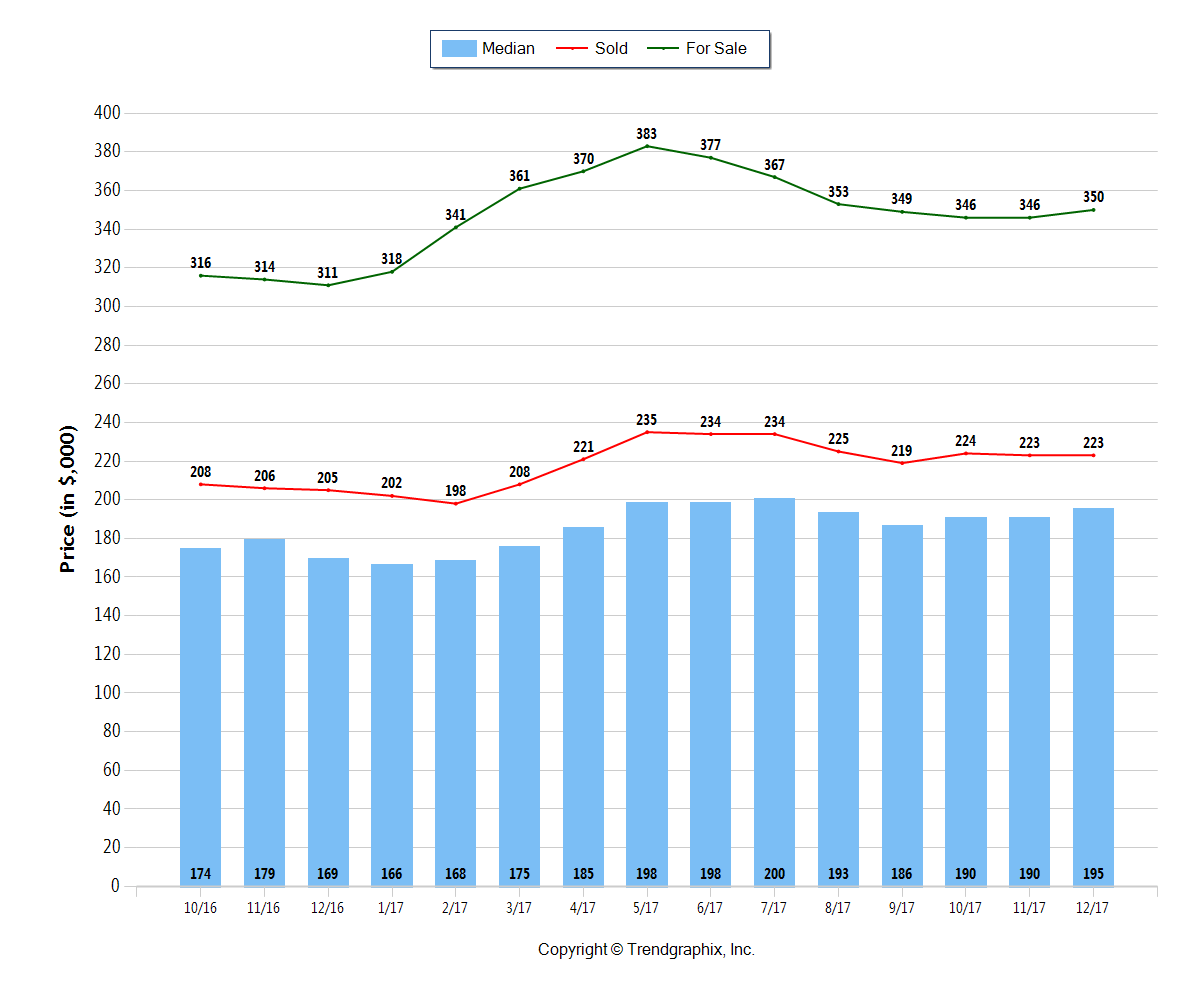 If you’re asking, “Is it a buyer’s market or a seller’s market in Columbus, Ohio,” you will need to look at the Months of Inventory and the Absorption Rate. Right now, we are in a strong Seller’s Market in Central Ohio. Let’s see why that is…

The Months of Inventory based on Closed Sales in December 2017 was 1.5. That means there were only 1.5 months of housing supply. When there is less than 3 months of inventory, it is considered a Seller’s Market.

The Absorption Rate based on Closed Sales in December 2017 was 67.3. This tells us the rate of active listings being sold each month. This month’s rate puts Central Ohio solidly in a Seller’s Market*. 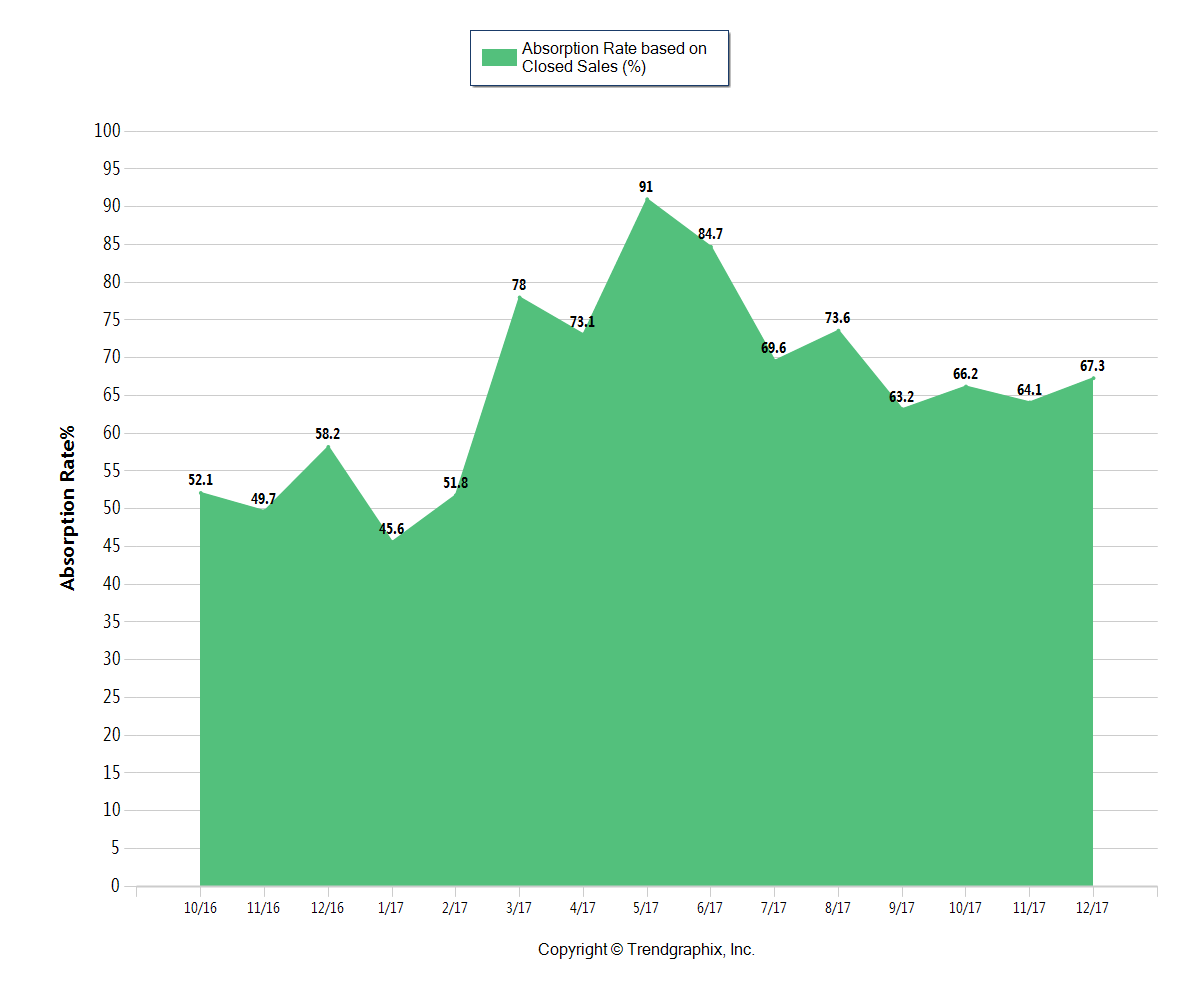 Use this chart to track the Columbus area real estate market through December 2017.

While the Columbus area has been in a Seller’s Market for some time, buyers can take advantage of the seasonal slow down we are currently in. But, don’t wait if you want to try to get a deal. The market is already ramping up for the spring and summer.

I have previously written about the best time to buy a home in Central Ohio, and the data shows that right now is the time to be out house hunting. If we look at the Days On Market chart above, we see that last year January and February is when homes took the longest to sell. This is also when the median home price was at its lowest over the last 12 months.

In general, home sellers have the advantage right now. Keep in mind that this strong Seller’s Market is being driven by the fact that inventory is extremely tight in the lower price ranges. That means if you are selling a home or condo under about $300k, you will likely sell quickly.

However, if you are selling a higher priced home, you may actually be in a Buyer’s Market due to lower demand for high-end and luxury homes right now. This has created a market-mismatch that home sellers need to be aware of.

If you have a property to sell use the Home Value Estimator. Your best course of action is to get in touch with me if you’re thinking about selling your home this year. We’ll talk about your home and determine the strategy that will most benefit your situation.