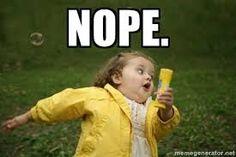 When you’re searching for a home in Columbus, you probably have a couple of lists in your head:

Unfortunately, most of the homes on this list fall into that third category, unless, of course, you like quirky features, are handy, or have a sizable repair budget.

Keep reading to check out these strange (but hilarious

) home fails you probably didn’t know you needed on your NOPE list.

1. A tree grows in… the driveway

Maybe if you’re a parallel parking whiz you could make this work. Otherwise, you will need to contact an arborist or tree surgeon before you can park a car in the garage. Or have a motorcycle — then you’re all good!

2. What is this house trying to say?

If your house resembles an emoji, chances are you’re going to get a lot of drive-bys as buyers attempt to figure out which emotion your home is trying to convey. Your guess is as good as mine.

So…this was at a house that I showed yesterday… Was someone drunk when they installed this toilet?! “That’s good enuff for mee..”.

” /> The space for the toilet was the same amount in any normal bathroom. They just decided they liked the angled approach better. What are your thought??? #RealEstate #Hilarious #AlwaysSomething #Houses #HouseFail #ToiletFail #Fail

Talk about “unique”. Looks like someone installed this in a hurry. If you love to entertain, this would definitely be an interesting conversation-starter.

4. That’s Gonna Be A Tight Squeeze

Even the slimmest homeowner would have trouble shimmying between the post and the wall to climb those stairs. Or, you would literally have to climb the stairs (over the railing, that is). This seems like poor planning on someone’s part. The bottom stairs should be angled out for access.

Another garage issue! Unless you have a flying car like something out of The Jetsons, you’re going to have a hard time parking inside this garage. The caption, which translated to English reads: “I assure you, dear, this house is well-built,” makes you wonder what else about the home is not right. I bet this isn’t the only “quirky” feature.

In all my days this is a first, I give to you a Kitchen toilet !!!!! Even has pipe work for washing machine!! How hygienic #kitchentoilet #councilhouse #flooring #really!!!! #food&poo #unhygenic

This “state of the art” kitchen was apparently designed to accommodate people with especially fast metabolisms. Either that, or someone has taken the popular “open concept” thing way too far. On the plus side, guests won’t have any trouble finding your bathroom.

Most people want a home addition to blend seamlessly with the rest of the architecture. Not these homeowners! What I want to know is: Which part came first, the cape or the tudor?

Putting your house on the market soon? Click the link in bio to find out what you should avoid when it comes to curb &#34;appeal.&#34; . . . . . #housefail #realestatetips #curbappeal #sellingyourhouse

The paint job can make or break a home’s curb appeal. This place is in need of a makeover. Choosing the perfect paint color can be a challenge, and it certainly looks like this homeowner struggled with committing to a single shade. Still, picking one and sticking with it is probably the best way to go.

9. More than a few missing links

The #Security on this house is top-notch! #HappyFriday #HouseFail #LOL pic.twitter.com/WhXd17MX6e

You can keep the gate locked and closed but without the rest of the fence, what’s the point? Perhaps the homeowner has a great sense of humor and wants to attract guests drawn to irony.

You don’t have to live like this … #funny #bergs #yxe #meme #bathroom #faucet #homefail https://t.co/rf2dgQ7A2T pic.twitter.com/XSSzICdu9s

Shower heads are readily available and not difficult to replace. Why resort to a garden hose?! If this homeowner is willing to do such a cheap and quick repair, what other shortcuts are lurking behind the walls? 😱 Probably best not to find out.

11. Bathroom off the kitchen — literally

Another “Open Concept” floor plan gone too far. Nothing says “dinner party” like lounging in the tub between courses.

Even so, a wall between the rather large tub and the dining room table would probably make everyone feel a lot more comfortable, especially when it’s time to host Thanksgiving dinner.